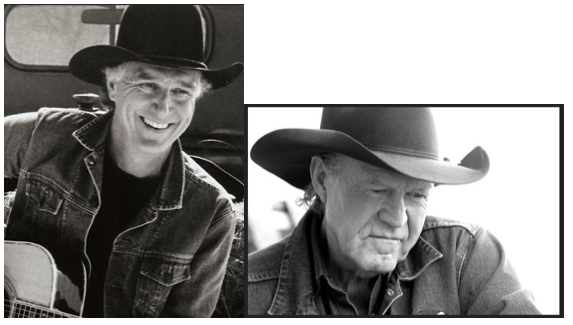 RIP Jerry Jeff Walker and Billie Joe Shaver. They both shook off their earthly chains this past week.

My DNA is steeped in the outlaw country music scene of Austin, Texas in the late 60s’s-70’s. These two men were founding outlaws along with Willie Nelson and Waylon Jennings, Emmylou Harris, Lucinda Williams. These were punk rockers singing country music. It was very clear they were NOT establishment. They were giddy rebels making sure you knew they did not care one bit about following the rules of show business. Or any other rules for that matter. That whole scene in Austin shattered norms and expectations for artists in every genre.

Jerry Jeff Walker and Billie Joe Shaver were cornerstone artists of this moment in time. My parents ALWAYS had this outlaw music playing in our home. When I say I’m steeped in this music, I mean it. Parties, happy hours, Saturday afternoon bbq’s. Daddy taught me and my two sisters how to dance the Texas two-step and the waltz to this music. We learned all the words and acted out the stories in the songs. Steeped.

This was the soundtrack to my life.

It’s because of them (and those like them) that decades later, I fearlessly and stupidly try doing artistic stuff. Just to see what happens. Not following any rules. Not trying to appease establishment. Just doing it. There is fallout. It’s not easy colouring outside the lines. My solo show, Shield Maiden, is an example of this outlaw culture. I do not have a theatre background or prior experience. I couldn’t follow the rules because I didn’t know the rules. So I just made a thing. And it was working until Covid hit. However, I met amazing folks in the theatre world that helped me so much. My gratitude to them for their generosity is endless.

Yet, as I work now on writing my next plays, I realize that I’m back in the same outlaw situation I was in prior to writing Shield Maiden. I’m making my own rules as I go along. No guarantee that what I’m writing will work or be received. Nevertheless, here I am, plucking away at strings of ideas, finding themes, dialogue that makes me laugh and cry. I’m just doing my thing. Making my own art. Living with my mistakes and trying to learn from them and writing more.

I got that from artists like Jerry Jeff Walker and Billy Joe Shaver.

This is a good article on Billy Joe Shaver. In honour of my favourite honkey tonk hero, my husband Dave Teichroeb (fantastic songwriter, by the way), here’s a sweet Billie Joe song about love in west Texas.

And here’s a great article on Jerry Jeff Walker. This is the back to the album cover for Viva Terlingua, one of my favourite JJW albums. I think I’ll play it tonight as an homage.